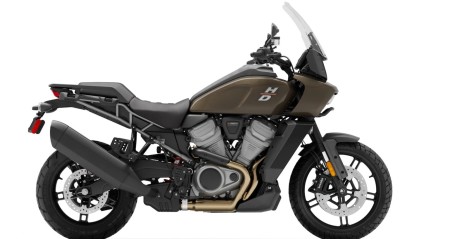 Here by the grace of my lineage. That's how Jason Mamoa describes the 2021 Pan America™ in the debut video, pointing out the long and winding road that led to the new Adventure Touring bike's creation.

Perhaps more than any previous Harley®, the Pan America™ is about the human spirit and thirst for adventure. About being a trailblazer. A bike you almost want to leave the mud on as a symbol of where you’ve been.

When motorized transportation made its debut, roads weren’t asphalt. The first Harleys were competing with the horse and buggy. Some of their marketing emphasized a motorcycle can get you where you need to go without having to feed it. They were built to handle any terrain, any conditions. In a way, Pan America™ goes back to those offroad, all-terrain roots.

It was World War II that changed everything again. Harley®  bikes were built even tougher, more fortified to go basically anywhere a Jeep could go. They carried riders safely through mud, rain, ice and snow. They performed even in dusty conditions. The manufacturer added storage capacity for carrying more gear over greater distances. Then the war ended and Harley® had to pivot.

Suddenly people were crisscrossing the nation on highways. It was about eating up miles, achieving aggressive speeds or laid-back cruising, often with a passenger. Consumers wanted bikes that would go fast, go far and look good on highways and urban streets.

Now a different demographic is emerging – one that wants to take exploration to the next level, who doesn’t want to be confined by manmade roads, and instead wants unlimited freedom to explore.

Harley’s engineers got to do something with the Pan America 1250 and Pan America 1250 Special they’ve not had the opportunity to do with previous models. The manufacturer is continually innovating, but largely bases designs and modifications on what has been successful all along. With Pan America, they started from scratch. The bike didn’t have to fit the classic 1936 H-D® silhouette, so something completely fresh emerged.

Instead of working within a basic framework, engineers generated a list of must-have features for an adventure-tourer and worked out from there. The results were sophisticated, intuitive and powerful with the new Revolution Max engine, an Adaptive Ride Height System, suspension-related software that was written in-house and loads of other innovations.

The entry-level bike comes in two colors – Silver Rock Gray or Vivid Black. The Special comes in River Rock Dark Gray, Vivid Black, Deadwood Green, Baja Orange and Stone Washed White Pearl. Both have an aggressive riding position, mid-mount foot controls, and are going to be most comfortable for riders on the tall side.

The two are about the same in terms of ground clearance, rake, length and front and back tires. Both have an ample 5.6-gallon fuel capacity.

The engine, fuel system and exhaust are the same on both models. Torque and horsepower are also identical. If you choose Pan America Special, you have the option of getting anodized aluminum tubeless laced wheels.

They’ll both take you pretty much anywhere you want to go on or off-road. The Special trim level gets you refinements like a center stand, an adjustable rear brake pedal you can adapt to your riding position, heated grips, a tire pressure monitoring system, electronically controlled back suspension and multiple settings for adjusting ride stiffness. The base model comes with Road, Sport, Rain, Off-Road and On-Road modes, and the special comes with two additional, custom modes.

Fans waited a long time for this one, and Harley® kept offering us sneak peeks, tantalizing action shots and tidbits of information. When it finally became available in February 2021, both critics and enthusiasts rushed to get their hands on one. So what are people saying? We found these Pan America reviews:

Rider Magazine – “The ADV class has become one of the most hotly contested categories in motorcycling, and H-D is joining the fray with two models...Loaded with technology, an all-new 1250cc V-twin engine and much more, these American-made ADV look ready for action.”

RideApart – “A little over a year after it was formally introduced at EICMA 2019, the all-new 2021 Harley-Davidson® Pan America 1250 is finally here. By the looks of it, Harley did its homework and gives us a bike we can really be excited about. “

Where to Buy Pan America

Harley says when people ride Pan America, their first question is, "Can I keep it?" Buy Pan America near Dallas at Black Gold Harley-Davidson. Contact us to make it happen.