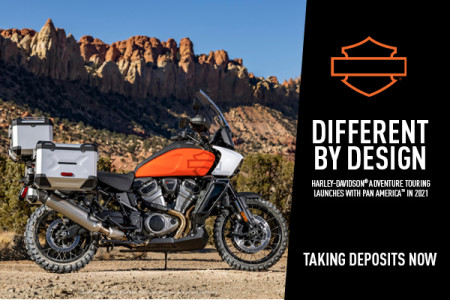 Part of Harley's® allure has always been the ability it gives riders to leave the confines of modern society and seek out their own adventure, either as a solitary explorer or with a small group of like-minded friends. The long-anticipated Harley-Davidson®  Pan America takes that ability to a whole new level.

Harley-Davidson® announced Pan America was coming back in 2018, and it was supposed to come out this year. However, like movies, concerts, sporting events and pretty much everything else in 2020, the launch was delayed (anyone else sick of hearing you can't have what you want "due to covid?") Now the motorcycle manufacturer is amping up marketing with the promise of a 2021 Virtual Launch Event. So we're hearing a lot of questions, and we wanted to put the answers all in one place.

So, so freakin' glad you asked. Pan America is an Adventure Touring motorcycle with a new engine, new offroad capabilities, specialized equipment and many more features that allow riders to go almost anywhere, even on challenging terrain.

We got to see the Harley-Davidson® Pan America at the 2019 International Motorcycle Show in California. The brand's first Adventure Touring motorcycle is part of the All Roads to Harley campaign to have 4 million U.S. motorcycle riders by the year 2027. Street Fighter appeals to the sport bike demographic, while Pan America offers new capabilities for offroad explorers.

Pan America debuts the completely new Revolution Max PowerTrain, a liquid-cooled V-Twin. Pan America comes with a 1250 cc engine, with greater than 145 horsepower (that's more than the comparable BMW). It's a middle-weight engine for Harley® , but on the large end of the scale for an adventure bike.

Harley has kept most the details about Pan America under wraps. For an adventure bike, obviously weight matters as much as power. Some motorcycle experts have estimated Pan America will weigh in well under 600 pounds dry, but at this point it's anyone's guess.

Just looking at the instrumentation we see heated grips, traction control, cruise control, a massive, refined TFT displays, an adjustable windscreen and a lot of other goodies. We speculate from an exterior visual inspection that riders will be able to make electronic suspension adjustments to switch between on-road and off-road riding.

On the ground, it looks like you get very knobby Michelin tires designed specifically for the Harley-Davidson® Pan America. The styling is super aggressive, with Harley's heritage evident in the tank shape.

What Will Harley® Pan America Cost?

Again, the manufacturer is keeping that detail under lock and key. Top Speed has guessed at the price tag, so has Asphalt & Rubber, but no one knows for sure.

What Will Happen during the Pan America Virtual Launch?

During the HD-21 virtual launch, Harley will announce all new 2021 motorcycles, parts and accessories, riding gear and apparel. The world can watch together as Jason Momoa and Harley-Davidson representatives tell you what to expect in 2021. A separate Pan America Virtual Launch focuses specifically on that bike.

You can actually participate in the Pan America launch event to experience it for the first time along with thousands of other Harley fans starting on January 19 at 10 a.m. CST (that's us). Register on the H-D®  website by completing their form. Registration is free, and you can add it to your calendar. Then on February 22, Harley will reveal the full details on Pan America at a second digital event.

Video promotions for the launch show tantalizing glimpses of Pan America chewing up rugged terrain, ridden by Jason Momoa. The Aquaman actor has long been a passionate Harley enthusiast. At the start of the pandemic he produced and directed a six-part video series for the United We Ride campaign. The series focused on riders impacted by coronavirus and spotlighted individuals who had been influential in the riding community.

When Will Harley-Davidson® Pan America Come Out?

If you're asking by what date Pan America will be in a dealership near you, that's still up in the air. Some of the new bikes will debut on January 19, and we expect them to quickly become available for purchase after launch. Pan America's launch is scheduled for February 22, so we expect to see bikes in store soon after.

The thing is, based on the feedback we've received, there's going to be a ton of competition for these bikes, especially immediately after launch. As Harley builds anticipation through virtual launch promotions, that demand is only going to build.

Where do I Get Harley-Davidson® Pan America?

Here's the part we're most excited about. You can buy Harley-Davidson®  Pan America near Dallas as soon as it becomes available. We just started taking deposits, so you can put yourself at the very front of the line. Contact us to find out how to be one of the very first to ride the adventure touring bike everyone is going to want, either by calling the store or using the chat feature in the lower right corner of your screen.