This article is to provide basic education to our customers about what YOU can expect from having your bike Dyno-tested. People come to our dealership looking for the following:

Customers only benefit from Dyno-testing if they have a goal in mind. Ask yourself why you want your motorcycle tested and what you hope to find out from the horsepower and torque numbers.

The only numbers that really matter are the ones that are consistent and trustworthy. Dyno runs can be used to see if a new exhaust system, or other component, helped or hurt an engine's power output.

Comparing horsepower and torque numbers with riding buddies or magazine test results is a zero-sum game and can lead to "horsepower unhappiness." Instead, Dyno Is used to educate our customers about their performance goals, and to keep us informed and up to date about the parts and services we provide. 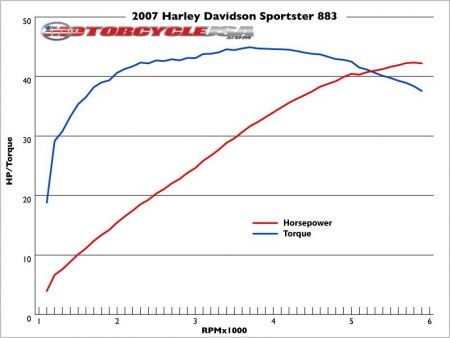 We hear these questions all the time:

It is a misconception that an engine makes horsepower. In fact, engines only produce torque at specific rotational speeds, or engine revolutions per minute (RPM). Horsepower is merely a calculation using the results of a formula that factors in engine RPM - and torque.

What Is Harley-Davidson® Engine Torque?

Torque is the twisting force or energy that an engine produces. Torque as a force can also be used to describe a pushing or pulling motion. In pure engineering terms, torque is also called moment or moment of force and is defined as energy required to rotate an object (an engine's flywheel, for example) about its axis.

In other words, torque is the twisting force measured at an engine's crankshaft or a motorcycle's rear wheel. Torque is measured in foot-pounds (ft. lbs.). In addition to measuring the rotational output of an engine, service manuals provide specifications for tightening a bolt in foot-pounds or inch-pounds. A torque wrench is used to measure how much twisting force is applied, in ft. lbs. or inch lbs.

When tightening a bolt, a torque wrench doesn't read the final torque value until the bolt stops turning. This type of torque is called static torque because there is no rotational acceleration involved when tightening a bolt. Dynamic torque is different; it involves acceleration as the speed of the rotational force increases. An engine can produce static and dynamic torque.

For example, if a motorcycle is being ridden at a steady throttle opening on a flat surface, the engine produces static torque, is opened, and the bike accelerates, dynamic torque is produced. Torque can be measured from the engine's crankshaft, flywheel, transmission output shaft, or most commonly at the rear wheel of a motorcycle.

In engineering terms, power output is expressed as torque multiplied by rotational speed around an axis. The formula for horsepower is: Torque X Engine Speed divided by 5,252. The number 5,252 is the result of combining several different conversion factors together, while taking into account the 33,000 ft lbs of work that a single horse can perform in James Watt's formula for horsepower. For the details regarding how the number 5,252 is derived, search online for "horsepower formula."

One activity that many motorcyclists participate in is beach racing, using horsepower and torque numbers to spar verbally with one another. Owners of cruisers, whose bikes might have lower horsepower than racing bikes, might say "Torque causes acceleration, not horsepower."

This thinking is wrong.

So How are Motorcycle Horsepower and Torque Related?

Before we discuss how torque and horsepower are related, let's review. Work is the application of force over a distance. Power is the rate at which work is accomplished within a finite time. Torque is the twisting force applied to an engine's crankshaft. Torque is always listed at specific rpm because no work or power is produced unless the engine is turning.

Learn From Dick and Jane

Once an engine is turning fast enough, the force exerted against a load (like accelerating the drum of an inertia dynamometer) and speed at which its work is being accomplished can be measured. Here's an example:

Two identical V-twin cruisers, with riders that weigh the same, are trying to pass a truck on the interstate. At 60 mph, both riders are in fifth gear, with their engines running at 2,500 rpm as they pull into the left lane to pass the 18-wheeler. The first rider, Dick, believes that acceleration is caused by torque, and he knows from reviewing a Dyno chart for his bike that torque increased from 2,500 rpm to 4,200 rpm. He leaves his motorcycle in fifth gear, whacks open the throttle, and starts to pass the truck.

The second rider, Jane, believes that horsepower, not torque, causes acceleration. She downshifts into third gear, and opens the throttle all the way.

When Jane downshifts, her engine is turning at 4,000 rpm, 1,500 rpm faster that Dick's engine. She has looked at the same chart and knows that torque from Dick's engine will decrease when it reached 4,200 rpm, but her engine's horsepower will increase as the engine turns faster.

When passing the truck, Dick accelerates at a constant rate as his engine torque increases. Jane accelerates at a faster rate than Dick, even though her torque is decreasing as her engine turns faster, because her engine's horsepower is increasing. Which rider passes the truck first?

Even if you don't ride a V-twin cruiser you probably know the answer - Jane, who downshifted into third gear and watches Dick trying to catch up to her. To make the most power, an engine has to turn at a high rpm, and Jane starts to pass the truck with her engine spinning at 4,000 rpm vs. Dick's engine that is only running at 2,500 rpm. Horsepower is the rate, or rpm, at which work is performed, and more revolutions per minute equal more horsepower.

What is Dyno Tuning?

Our experts run your motorcycle on a Dynamometer machine to measure both torque and horsepower at every stage of the RPM range. Operators test different engine loads and conditions. They use results to adjust your motorcycle's fuel mixture and timing.

What are the Benefits of Harley-Davidson® Dyno Tuning?

Dyno tuning helps motorcycle owners make the most of every available aspect of their motorcycle's power and efficiency. Customers at our Harley-Davidson® dealership report the following:

Almost all motorcycle reviews list HP and torque numbers. When riders bench race, these same numbers are thrown around with bravado as each owner brags about his engine modifications. Manufacturers use the numbers to sell performance, image and technology.

Because there are so many variable when performance testing a motorcycle, it is not easy to make true comparisons. The same motorcycle tested on different days, measured on different Dynos with different correction factors, tire pressure and Dyno operators can generate different numbers.

So how can any horsepower and torque numbers be useful? Remember that a motorcycle manufacturer used horsepower and torque numbers to sell motorcycles. It tests its engines under ideal conditions, measures power at the crankshaft and does not account for power loss due to the rear tire, shaft, belt or chain drives. Manufacturers can't "adjust" numbers too drastically due to legal issues with advertising claims, and most use SAE correction factors to level the playing field.

Magazines are a mixed bag regarding how they get their performance numbers. The better magazines will use the same Dyno and operator to get all the HP numbers for the bikes they test and with correction factors (air temperature, barometric pressure, and humidity) applied. Comparing one magazine's number to another is pointless because of the variables in just about everything related to testing.

What Else Should I Know About Harley-Davidson® Dyno Tuning?

The only time horsepower and torque numbers become serious is then a rider is going to spend money. If an aftermarket exhaust system and other performance parts are going to be installed, and the desired outcome is a different exhaust note and some bragging rights, then HP numbers are immaterial. If the gain or loss in power is important, then measuring power output needs to be approached with some common sense.
Have more questions?

Ready for a Dyno tune or simply want a Dyno run to see where you’re at? Then click below to schedule a meeting to discuss your needs!