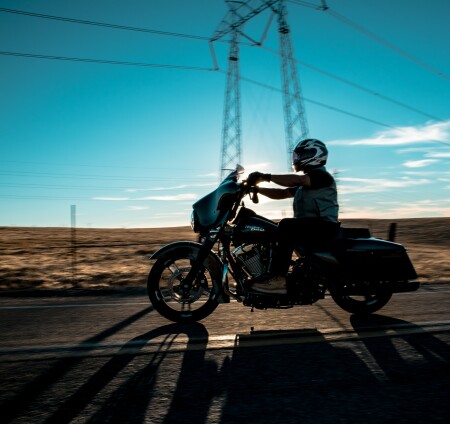 What is Target Fixation?

During World War II sometimes fighter pilots were so focused on the targets they were bombing, they ended up flying right into them. Experts named the attentional phenomenon "target fixation," but it didn't only happen with airplanes. People driving cars and riding motorcycles also experienced it.

Basically, when they perceived something as distracting or dangerous, they became so  focused on avoiding it they actually steered into it or into other dangers they failed to notice. Panic can make riders lock their gaze on one object, and their vehicle follows the same path as their gaze.

While it happens with drivers managing all types of vehicles, it seems especially prevalent among motorcyclists, probably because steering a bike involves the whole body. With a car your hands work the wheel and feet the brakes or gas, but that's about it. On a motorcycle your arms, torso, body weight, thighs and every other body part subtly and not so subtly influence steering.

Here are a few examples of how target fixation can lead to problems.

Target Fixation In a Curve

Max was a new motorcycle rider from Allen, TX who decided to take his bike on some winding roads one Saturday. Things were going well and he admits he zoned out a little. Suddenly he found himself in a curve where he felt like he was going too fast. Instead of letting his bike continue through the curve, he slowed down and hit the brakes, trying to pull his bike out of the natural lean. A telephone pole loomed up by the roadside and he suddenly felt like he was so out of control he couldn't avoid hitting it. He couldn't take his eyes off it as he started to wobble. In just a few seconds he went from in control of his motorcycle to almost running into an object that wasn't even in his path.

Crash On a Bridge

Simone had only been riding a few months on the streets near her home outside Rockwall. She finally worked up the courage to ride her bike to the medical center where she worked. She had an overnight shift so traffic was light as she crossed Lake Ray Hubbard on 66. She was going just a few miles over the speed limit enjoying the water and the colors of the evening, and she didn't realize the car in the distance was going a lot slower than she was. By the time she did, she didn't have a lot of time to think through what to do next. A pickup was approaching from the other direction and the bridge's guard rails loomed large. Her eyes were glued to the back of the car because she was so afraid of running into it, so she couldn't evaluate any other options. She could have swerved, but she ran into the object of her target fixation.

Fixating on Other Riders

Michael went on his first group ride, thankful he had the chance to learn from other, more experienced riders. The terrain was more challenging than he expected, so he kept his eyes fixed on the rider ahead of him, reasoning if he just did what that guy did, he'd be okay. The problem started when he relied on that other rider to set the speed and identify possible dangers. Michael turned off his brain so at first he didn't notice that the rider ahead was slowing down. Then once he did, he panicked and felt like he was going to crash into him. He was able to veer off to the side, but he hit a hill on the roadside and damaged both his bike and his pride.

Nancy has been riding for years, but everyone has days when they're not on their "A" game. She was tired, it was blistering hot, and her daily commute was long and boring. She's still kicking herself over the day when she was riding along at around 50 mph and she noticed several emergency vehicles with their lights on and what looked like a major accident. An 18-wheeler was involved, and she was concerned about the vehicle it hit and what had happened to the driver and passengers. She craned her head to see as she got closer, and her focus was on the traffic accident, not on where she was going. As her eyes turned, her hands did too and she imperceptibly leaned, drifting out of her lane. She glanced off a motorist in the next lane over. Miraculously, she had only minor injuries but she knew things could have been much worse.

Target fixation blinds you to your surroundings, and that's what makes it so dangerous. Where your eyes go, your bike follows.

Riders are less likely to freeze and panic as they gain experience and confidence. The first Sunday of every month, level up your riding skills by getting involved in safety rides at Black Gold Harley-Davidson®. It's also a good idea for riders of all skill levels to get involved with our Panther Creek H.O.G. to rub shoulders with people who are passionate about motorcycling and the H-D lifestyle. Get in touch to find out more.