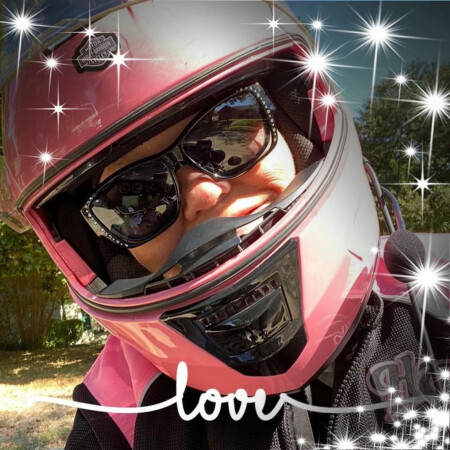 If you've been at a Black Gold Harley-Davidson® event or seen the Panther Creek H.O.G.® Chapter roll by, you've probably noticed Lisa. She's the one with the pink helmet, pigtails and pearls on a Harley® much, much bigger than she is. And if you've talked with her for even a minute, you know her spirit and enthusiasm is even bigger than that. We chose her to interview for Women Rider's Month because her exuberance for riding is so infectious and because in the short time she's been riding, she's shown us what it means to be daring, determined, friendly and courageous.

She Swore She Would Never Ride a Harley®

When asked about her history with riding, Lisa laughed and said, "Well, it's a short-lived history. I rode back in the nineties, then I started having children. I put my bike up.

"I swore I would never ride a Harley®. I was just going to get a Yamaha. I wanted a little bigger one. I had my eye on one quite a while and waited to see the price drop, but when I talked to the dealership, the guy there said, 'That's too big for you.'

Lisa and her daughter left that dealership shaking their heads, and ended up at the BGH-D® Harley®  shop where they met Kim Edwards. "I needed something inexpensive and not too big. I saw this Dyna out in the front, and we ended up buying it right there."

Then Reality Set In

Lisa was attracted to both the bike's looks and its price. "I wanted nice but affordable," she remembers. However, when they delivered the Dyna to her house, she wondered if she had made a mistake.

"I hadn't really ridden it. It looked a lot bigger when they delivered it to my house. I had to ask the guy to drive it into the garage.

"I called Kim and said I'm scared. She said suck it up buttercup, you just need to practice." And that's what Lisa did.

She took her new bike to the nearby high school and practiced in the parking lot until she felt more comfortable with it. "Before I knew it I ended up seeing the Panther Creek H.O.G. Chapter at a restaurant close to where I live and I decided to see what they were about. She introduced herself to the group and before long, she had joined.

Leveling Up Her Riding Skills

That's when Lisa really engaged with riding. "I started practicing with Crazy Ed and riding with other groups. The Road Captains with Panther Creek are amazing. I went on a trip with them on my Dyna to Arkansas. They were so gracious, just babying me along as I was learning to ride better." Time in the saddle accumulated quickly, and Lisa quickly skilled up.

"I want to shout out to the service team," Lisa volunteered. "Shane has always been my service person. From day one he knew I was a solo female rider, and I relied on him. I depended on him to be real with me. He's just always good about taking care of me, he made sure my bike was safe. As I was spending money on my Dyna he would say, 'you're going to outgrow this bike.'"

Lisa loved her Dyna, and at first she thought she would never want to get rid of it, but she was inspired by other Panther Creek women riders. "Several of the women rode big bikes, and I was just amazed at their ability to do that. They encouraged me."

Then she saw a 2017 Ultra Limited at the old Black Gold location and found she could sit on it flat footed. "The next thing you knew Crazy Ed was up there with me, trying to talk me into it. I wanted to test drive it. Ladies that rode Ultra Limiteds were telling me, 'You can do this!'

"Heather set up a test ride. I was a little bit nervous, and I think they were all terrified for me. When I made that first sharp right my fear was gone, and that bike was mine."

How Riding Changed Her Life

"Riding can change your life and empower you in so many ways," Lisa explained. "For me, I feel more powerful and stronger. I've always been pretty strong, but riding you're overcoming fears, learning brand new skills. I'm an older rider, and it's true what they say about staying active and keeping learning. Overall, riding just gives me a better confidence level. That transmits into my daily work life, in a good way."

She draws others in and celebrates everyday moments by taking photos with them. "I take selfies everywhere I go, and I post them so people can see them. I'm not the dedicated photographer, but my whole life I've been the one who took the pictures so I wasn't in any of them. When I started riding I decided I was going to change that."

She also found her perceptions went though a massive shift when she got involved with other motorcyclists. "It was intimidating when I first went in," she remembers. "I'd never been around bikers before. My image was inaccurate. I just knew the bad bikers on TV."

At a time when words like diversity and inclusiveness can be so charged, she found within the biker community a living, breathing example of how things could be at their very purest and best. "I'm a paralegal. We've got doctors. People from every walk of life are riding, and we are all equal. I was really impressed because you have no idea who you're meeting when you meet someone riding a bike. Everybody loves everybody, and everybody helps everybody. You never meet a stranger."

Her Advice to Other Women Riders

Lisa advises women who are new to riding to get involved with safety rides like the ones that take place at Black Gold Harley-Davidson on the first Sunday of each month, when riders set up cones and do slow practice maneuvers. "Get your seat time in," she says. "It's amazing how quickly you develop the skill to ride."

She also recommends being actively involved in riding groups. "You can't just sit in the corner, you have to also engage people. It's hard when you're new going into a group, and we do the best we can to make people feel welcome. Put yourself out there. Mingle and talk to people. Our chapter has amazing female riders, and it's very safety conscious. I love our chapter, and anyone who buys a bike from Black Gold needs to come and get involved with it."

Lisa summed up her love of riding when she said, "It's empowering. Your to do list goes away. There's a sense of freedom no one understands until you ride, and once you do, you just can't think of not riding."

At BGH-D®, we're thankful for women riders like Lisa, and want to do all we can to help more women embrace their love for life on two wheels. Find out more about Panther Creek H.O.G.® here, or see our list of upcoming events.