“We are kickstands up on the dawn of a new day.” The Further. Faster. World premiere started with words of quiet anticipation, much like the first glimmer of daylight, and gradually unveiled this year’s new models. In case you missed it, we’re bringing you this 2022 Harley-Davidson® World Premiere recap.

The 2022 Harley-Davidson® World Premier delivered on the promise implied by the “Further. Faster.” title. The manufacturer just released a lot of performance oriented bikes, both in the Low Rider and the touring lineup. Some of the new models might be the biggest thing to happen in motorcycling in the last decade. Now let’s talk about the bikes.

ST stands for Sport Touring. This beast is a sport-touring bike that has a Softail chassis and a Milwaukee-Eight® 117 powertrain. The Low Rider ST will take you anywhere you want to go with the attitude on two wheels you only get from Harley. It has saddlebags similar to what was on the 2018 Sport Glide and a fairing similar to the FXRT. It comes both in Classic Black and Gunship Gray.

Adding the fairing was genius in terms of modernizing the bike while still including retro elements that are both classic and edgy. A lot of the people who watched the World Premiere live with us here at our Allen TX Harley® dealership say the Low Rider ST was the star of the show, the bike they’d most like to test ride (book test rides here btw). If you look up the MSRP, you’ll see it also comes at an extremely enticing price point.

This year, the bike got an engine upgrade, moving from a 114 to a 117, so it’s now on par with the CVO. Harley also relocated the gauges so they stay more in a rider’s line of site. Both of these changes place a high priority on performance. The Low Rider S also has a taller rear shock, increasing rear wheel range of motion. We expect demand for both Low Rider S and Low Rider ST to be very high, so if it’s on your wish list, you’ll want to let us know as soon as possible.

King of the Baggers Inspired Road Glide and Street Glide

Fans were thrilled to see the Wyman brothers debut the Road Glide ST and Street Glide ST during the 2022 Harley-Davidson® World Premier. The main difference between the two is that the Road Glide has a fixed shark nose fairing while Street Glide comes with a fork-mounted, swiveling batwing fairing.

They come with the Milwaukee-Eight® 117 for the maximum displacement available straight from the factory. Thirteen-inch shocks deliver improved lean angle and comfort. Because the new models are racing-inspired, saddlebags are short rather than stretched, and fenders are sleeker. Bronze highlights speak of refinement and exclusivity. Like Low Rider ST, they're available in black or Gunship Gray.

If you know anything about CVO history, you know paint always has been (and always will be) a big deal. For a while that meant two-toned paint that had a classy, sophisticated, expensive feel. This year the new models have paint that's more aptly described as unapologetically in your face. Colors have names like Wicked Orange Pearl, Hightail Yellow Pearl and Dante's Red Fade, but you have to lay eyes on them to really understand the visual impact from red flames or vivid striping. Smoked chrome is also a new thing that gives an unmistakable new look. The changes were not subtle.

The new CVOs offer the ultimate everything, from premium controls and audio to heated seats to new headsets. Over the years, Harley® has thought of every detail and included too many refinements to list here. They still come with all the good stuff, but the main changes were cosmetic. 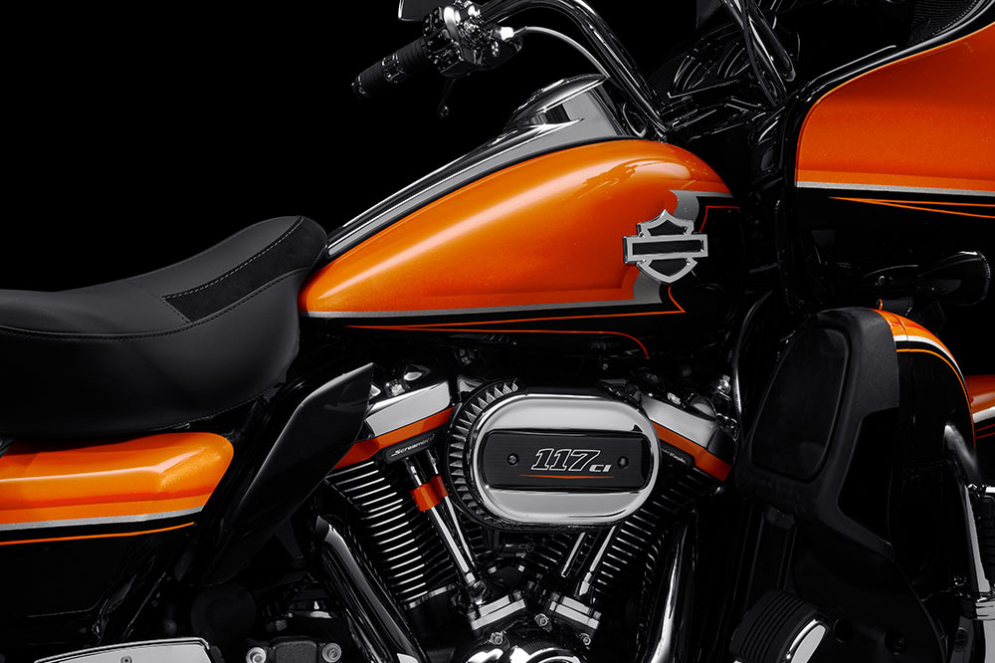 "The world is your Oyster," said apparel and riding gear designer Romy Scheroder during the Further. Faster. event. She explained the craftsmanship involved and introduced new offerings designed for on and off the bike, clothing and accessories that provide versatility for diverse lifestyles.

Hints At The Future

At the end of the debut, the premiere video hinted at possible mid-year release changes. Last year we saw something similar with Pan America's release, followed by the new Sportster S and the Icons collection. A new line of jackets was designed in conjunction with individual bike styling so the clothing and motorcycle aesthetics work together.

Since the January 26 premiere, Harley®’s YouTube video alone has more than 300 thousand views, along with a flood of positive comments. DoctorMotorcycle posted, “LowRider ST is so badass. Great job everyone at HD. I used to be a vehement Harley Hater, the past couple of years you guys have really changed my mind, especially regarding the Sportster S/Pan America/Revolution Max…Everyone that rides the new Sportster S talks about how awesome it is…” Army Biker posts, “Great job Harley-Davidson you listened to us and you delivered. Everybody's super stoked just read the comments you guys knocked it out the park with this lineup." We heard similar sentiments from people viewing at the dealership.

Where to Get 2022 Harley-Davidson® Models Near Dallas

You're most likely not going to be able to walk into a dealership and find these new models available for purchase for quite some time, because people are buying them as fast as they can be produced. There's a line, but we can help you get a place at the front. Start your 2022 motorcycle reservation online and a staff member will be in touch.