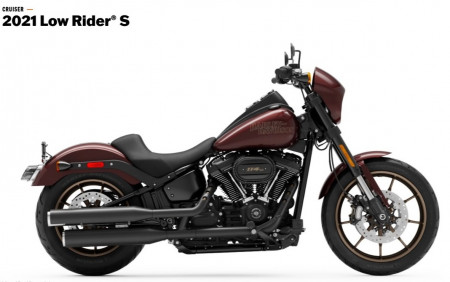 So some of the 2022 model Harley®  changes recently announced by Harley-Davidson® are just minor upgrades and updates, not major overhauls. That’s a good thing, because when you love something, you don’t want it to go away. So updated paint and graphic options are more than enough.

H-D® also announced, to the dismay of many, that it would be discontinuing some model, with Iron 1200 being one of them. We've already updated our 2022 Harley-Davidson® motorcycles online showroom, and if you take a quick peek, you'll see that as of the date of this article, some models are conspicuously missing. A crowd favorite everyone is asking about is the 2022 Low Rider S.

Harley-Davidson® news always makes waves across the riding community, and when it recently unveiled part of the 2022 lineup motorcyclists analyzed every detail and began to speculate. The official word included a carryover lineup from the previous year with updated wheels, colors and graphics, but models like CVO were conspicuously absent.

Touring bikes also come in an eye-catching offering of new colors. The changes were welcome but not major, and H-D®  encouraged consumers to stay tuned for more information on the rest of the new models and for CVO updates on January 26 at the World Premier "Further. Faster." event on January 26, 2022. (Side note: you can also reserve a 2022 when you click here.)

How Rumors Get Started

Nobody likes to wait to be in the know. Online motorcycle news sources need something to write about and YouTube influencers in every space are always trying to find the next big scoop and be the first to put it out there.

It's important to know that nothing is written in stone until it comes officially from Harley-Davidson®. We can tell you what people are saying, but the best way to ensure you have rock solid intel is to sign up for updates and plan on viewing the World Premier event, when all will actually be revealed. We're even having a watch party at BGHD, so mark your calendar and we'll view it together. There's also an option to add it to your calendar (Apple, Google, Office 365, Outlook etc.) so you receive notifications as the date approaches. All that being said, let's look at some of the articles circulating the web about the 2022 Low Rider S.

What One Brazilian Blogger Writes on 2022 Low Rider S

Dr. Dan Morel writes extensively on Harley-Davidson®  news, and on January 6, he posted the article World Exclusive 2: Harley®  2022 Low Rider S. It's in Portuguese, but no worries if that's not your native language because we'll summarize here.

The beginning of the article includes a disclaimer stating 2022 Low Rider S images were obtained legally and do not infringe on intellectual property rights, and that they're part of H-D® Motor Company disclosure materials for 2022 models. The writer uses photos he claims are from the motor company to deduce new models might come with these changes:

Harleysite in Germany followed up with an article on January 7 echoing the changes above, highlighting the switch to the powerful 117 alongside cosmetic changes. The article analyzes images and video from teasers to infer 2022 Low Rider S could have updated tank lettering and graphics, might have the option of bagger style shiny cases (similar to what you can get now on Sport Glide), light alloy wheels, disc brakes and loudspeakers like what currently is only available from the factory on the touring lineup.

The page also offers a data sheet with some pretty exact specifications, but here at Black Gold Harley-Davidson®  we're going to wait for the official word before we publish details.

If leaked information does turn out to be accurate, it certainly aligns with the "Further. Faster." messaging from the World Premier event. The engine changes will definitely get you faster. And, if the 2022 Low Rider S comes with a fairing and saddlebags, riders are also more inclined to go further. We're definitely eager to see the new models and review the actual specs when they're officially released.

Right now you can reserve a 2022 Low Rider S directly through our website. Click the link and we'll be in touch to make sure you receive one as soon as they become available. This one is sure to be a popular bike, and demand could outpace supply, so you definitely want to make sure you're at the front of the line. If you have questions about the process or what you can expect, get in touch online or call us at (214)495-0259.