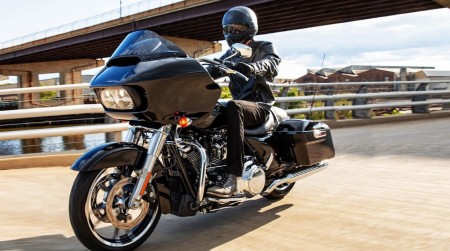 Coke vs. Pepsi. Bears vs. Packers. Dunkin Donuts vs. Starbucks. Some rivalries are just legendary, and the world may never come to a final ruling on which side is better. Competition makes brands and individuals do crazy things because taste is so individual, so it can be hard to find a common ground, whether you’re comparing Marvel vs DC or asking is Harley® Road Glide better than Honda Goldwing.

When people ask whether Harley® or Honda makes a better motorcycle, it’s usually for one of two reasons. Either they own one brand, are fiercely loyal and their neighbor or cousin or arch nemesis says the other brand is better, or they’re in the market for a touring bike and they genuinely want a comparison of Harley Road Glide vs. Honda Goldwing.

If you’re in the first group, if you believe Harley Road Glide is better and someone else is arguing in favor of their Honda, you’re absolutely right. Hands down H-D® wins. You’re probably not going to convince them of that any more than you’re going to get a die-hard iPhone fan to switch to Android, but that’s okay. Let them keep their Goldwing while you leave them in a cloud of dust on the bike that’s better looking, more comfortable and speaks to the soul.

If you’re in the second, let’s talk about specific differences between the two bikes. We’re going to compare the base model for both bikes and note options along the way.

Touring bikes are big and powerful, built to provide the ultimate experience in motorcycling. People buy them because typically they come with the most bells and whistles, greatest storage capacity, best available technology and the strongest engines.

Because they’re bigger, they can be challenging to new riders. They’re also more expensive because they have more to offer. There’s a higher bar in terms of required riding skill and also affordability, so they’re a status symbol. Just because you can ride one doesn’t mean you can afford one, and the reverse is also true. Having a big bank account doesn’t guarantee you can handle an 800-pound bike. That’s one reason why those who have the ability to cruise along on their touring motorcycles describe it as one of life’s finer pleasures.

H-D points out that the Harley Road Glide is for people who:

It’s for people who want to enjoy the journey, to be able to ride for hours and take in the scenery, not rush to get there because their bike wears out their back and their backside. Road Glide’s weight, large windshield and more accessories means it’s designed for adventure on paved roads. If you’re more about offroad adventure, you might be more interested in the adventure tourer Pan America.

With all the fuss about H-D® being too expensive, it’s normal to ask what’s the cost difference when you compare Honda Goldwing vs. Harley® Road Glide. A lot of people are surprised to find out the H-D® bike actually costs less than the Honda when you look at starting MSRP. Pricing obviously changes from year to year, and in the interest of keeping this article current, we’ve provided links to each manufacturer’s website so you can see the current year model.

Both Goldwing and Road Glide have an upright riding position for long-distance comfort. The seats are lower and foot position forward. People who have owned both bikes say the stock seat on the Honda is hard and uncomfortable, but the pillion seat is great. Most riders say the stock seat on the Harley is the more comfortable of the two. Many riders also prefer Harley’s roomier floorboards.

A low seat and center of gravity contribute to better handling, especially on a heavy bike. Road Glide has a 25.9-inch laden seat height, where Goldwing stands at 29.3 inches. If you’re a tall rider worried about being cramped with the lower seat, stop by and sit on one, you’ll find the forward foot controls and sweeping handlebars allow plenty of room to stretch out.

The Goldwing is known for being comfortable and well-balanced, and it comes with technology to adjust suspension and improve handling. Harley also is continuously engineering technology that makes bikes incredibly intuitive so rider and motorcycle can move together as one even during unexpected situations or adverse road conditions. Road King has optional Reflex Defensive Rider Systems (RDRS) that include the following:

If your intent is to take your bike on trips or to spend weekends exploring the back roads around Allen, Garland, Rockwall and McInney, you want a bike that isn’t going to have mechanical issues along the way. Some people choose Road Glide over Goldwing because they’ve experienced problems with the Honda. In response to a video comparing Honda Goldwing vs. Harley Road Glide, multiple bike owner Frank Pellegrino writes, “Most disappointing with the Honda is that it is hardly trouble-free. I’ve had a number of electrical issues. Switches and servo motors have failed, some with very inconvenient consequences. The Goldwing is a very complex machine and if you do your own work it can be very difficult. An air filter change can take up to six hours to complete and installing accessories can also be difficult. The Harley is much easier to work on. That being said, the Honda does things magnificently…it’s a phenomenal bike when everything works, but it doesn’t always.”

Goldwing weighs 787 pounds with standard equipment, fluids and a full tank of gas. In running order, Road Glide weighs 855 pounds. Road Glide’s tank will hold six gallons of gas to Goldwing’s 5.55 gallons. It will take you farther too, since the Harley gets an estimated 45 mpg compared to Honda’s 42.

Road Glide has 19 inch wheels to Goldwing's 18 inch ones. The Honda has slightly roomier saddlebags, but both bikes have ample room for tools and gear.

Ultimately, the choice is still going to boil down to individual taste. If you're trying to decide for yourself when it comes to Harley Road Glide vs. Honda Goldwing, the best way to do so is to ride one. Click here to schedule your Road Glide test ride today.