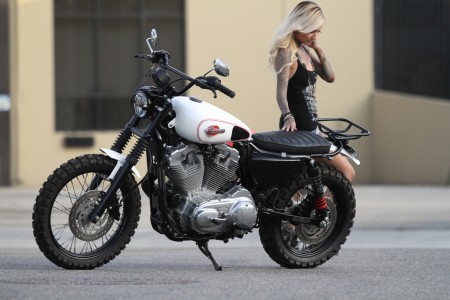 The Sporty has been around since 1957, and for that whole time it has been one of the most popular and successful models the manufacturer produces. It has a long and varied history, so it's easy to find Harley-Davidson® Sportster reviews on how well it handles, how long it lasts, performance under a variety of uses and a host of other topics. We'll focus on what motorcycle enthusiasts say about it in response to some of the most frequently asked Sportster questions.

Is Sportster a Good Bike for Beginners?

In the years Morgan Gales has been an author for Motorcycle Cruiser, he has written reviews on everything from saddleback leather briefcases to Polaris Slingshots to Moto Guzzi. That's why it's impressive when he writes there are "several unique qualities that make Sportster one of the best beginner bikes out there." What are those unique qualities? Gales' Sportster review offers the following:

The availability of used models - Critics are always quick to bring up the high price tag for Harley bikes. Sportster is a popular option for beginners because they've been around for so long there are used Sportsters in varying price ranges. If you only have a few thousand to spend on a bike, with a little patience you can probably find a used Sporty in good running order. Click here to see our current pre-owned inventory for under 10k.

The ease of finding parts - Customize that Sportster as you go and you might never feel the need to buy a different bike. Harley®  has improved and innovated over time, but the sheer number of years they've been making Sporty means when you need a part, you can probably find or order it, and it won't cost what it would for a bike produced in much smaller numbers or over a briefer time frame.

They're simple to care for - Again, because of their popularity and widespread ownership, it's not hard to find someone to work on your Sportster when you need it. For simple things, you can find plenty of online forums and videos that will walk you through step by step.

You can seriously amp up performance - While a lot of Sporty reviews point out how it's a great beginner bike, riders often find it's a motorcycle they never grow out of because the model has several top end kits that improve performance and aftermarket upgrades for brakes, suspension and other components.

It's easily configured for fit - Change your seat, your handlebars, your suspension, your wheels size or a number of other components and make Sportster the perfect fit whether you're a tall rider, a short rider or anywhere in between.

How Do Harley® Sportsters Hold Their Value?

Riders and drivers recognize that almost all vehicles depreciate, and nobody likes throwing money away. So it's wise to read Sportster reviews before you buy to find out how well they hold their value over time.

Los Angeles Times wanted to know how H-D® stacked up against others like BMW and Ducati. They reviewed data compiled by the Kelley Blue Book Official Motorcycle Guide and found Harley-Davidson® bikes kept an average of 84 percent of their value over a period of five years. All the other bikes in the study trailed behind.

Motorandwheels.com revisited the issue last year and says compared to other brands, Harley bikes "have better resale value than most rival brands." They credit these factors with why Harley continues to be a solid investment:

Are There Common Problems to Sportster Riders Should Be Aware Of?

Savvy purchasers research known issues before they buy to avoid wasting time and money when they could learn from the experiences of others. But if you do a Google search for recurring Sportster mechanical failures, you're just not going to find them.

Instead, you'll run across threads like this one on Reddit where people say things like, "Evo Sportsters are damn near bulletproof. There is no common problem with them." Chopcult visitors call them "indestructible." There's always going to be the usual critic chatter about vibrations and oil leaks, but Sump Magazine reports Sportster is significantly less prone to oil leaks than older Ironheads.

The biggest reason for their reliability is that Harley started with an extremely solid bike, then just kept making it better. Here are a few of the most noteworthy changes:

CycleDrag says the Harley Sportster "dominates and outlasts" other V-Twins because it's consistent, reliable and powerful. When a Cycle World writer hopped on a custom Sportster for Hooligan Racing he said, "The bike's rowdiness, anger, and noise is gleeful overkill in a class founded on budget fun. However, true hooligans know you can never have enough power. It's a vicious brute that is fun because it's much too much."

Just how fast your Sportster will go varies by bike. When Top Speed tested the 2011 model XR1200R Sportster, the top speed attained by the bike was 122 mph. To make yours faster, we can help you do the following:

Should You Buy a New Sportster vs. Used?

Sporty always makes it onto lists when it comes to the best new motorcycles under $10,000. It's affordable, and they hold their value, so sometimes people wonder why they should buy a bike that's a few years old when they could spend a little more and purchase one brand new? Cycle World called the 2020 Sportster, "a basic, elemental canvas upon which to hang your custom desires."

The decision to buy a new Sportster vs. a pre-owned Sportster is highly individual. When it comes to price, for some people it doesn't matter if a used bike and a new one are only a few thousand dollars apart, the less expensive model is all they can afford. And if you're buying a bike that's only a few years old, the biggest part of the depreciation has already occurred.

When you buy a new bike, you know you're starting with a clean slate, not buying someone else's mistakes. On the flip side, sometimes when you buy pre-owned, expensive modifications have already been made.

The best choice is always to purchase from a reliable source. If you buy a used Sportster from us, it has gone through a comprehensive inspection and it comes with an unbeatable warranty. Plus, we offer financing for both new and used motorcycle purchases.

Find out more about buying a new Sportster here.

Or, follow this link to search for pre-owned bikes.