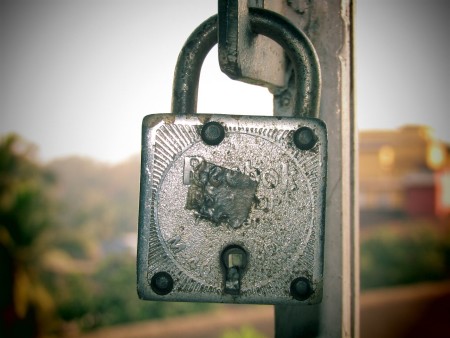 If you own a bike, your worst fear is probably getting in a bad accident. Your second worst is having your Harley® stolen. If it hasn’t happened to you, chances are you know someone who has been a victim of motorcycle theft.

The victim always says they didn’t see it coming. They never heard the thieves. They had no idea how quickly it could happen. Then their bike was gone without a trace and they lost a treasured, valuable possession.

Because they’re a**holes. They don’t want to work hard to earn it like you did, they want to get it the easy way. Also, because motorcycle owners often don’t realize the threat, so they leave their bike vulnerable, and the temptation is just too irresistible to people who don’t have morals to begin with.

Bike theft pays. Sometimes they re-sell them to a third party that creates fake titles and sells the whole thing. More frequently they chop them up and sell the parts.

How do thieves steal motorcycles? Sometimes it’s as easy as throwing a leg over and riding away. The thief walks up to your bike, disables anti-theft devices and locks, jump starts the engine and hits the road with your bike. It just takes one person who can get dropped off or take a bus to get within walking distance.

They target bikes that are easy to steal so it takes seconds and attracts little attention. If anyone nearby notices, they just assume the bike belongs to the thief, so they don’t take note of any distinguishing features.

Another method of motorcycle theft is “grab and go.” It takes at least two perps, but again, it can happen in a heartbeat. The thieves drive up in a van, they jump out and throw your Harley® in the back, then they drive off with it. These guys are more likely to get caught, but good sense isn’t exactly a strong characteristic of bike thieves.

A break-in is a variation of the two. If you keep your bike in a garage or shed, thieves break in and ride off on it or load it in the aforementioned van.

How Likely is a Harley® to be Stolen?

The National Insurance Crime Bureau keeps tabs on vehicle theft, and their data includes motorcycle theft by make and model. Consistently, Honda is the most frequently stolen brand, most likely because of the sheer number of them in the U.S.

Thieves like to steal common bikes, because there’s a market for their parts. A basic black Honda sportbike is cheap transportation and has a lot of plastic parts that get dinged and cracked with daily use. There’s a market for replacement, and riders don’t ask a lot of questions when they’re getting a cheap new fender. Yamaha and Suzuki bikes are also likely to be stolen for the same reason.

Harley® is the fifth most likely motorcycle type to be stolen. Thieves love to ride off on a Harley, but they’re less likely to do so than other bikes for a couple of reasons:

NCIB released its most recent motorcycle theft statistics on August 28, 2019. Overall, motorcycle theft saw a six percent decrease from the previous year, but there were still a total of 41,674 bikes stolen in 2018 (compared to 44,268 in 2017). The bad news is, the majority of them were gone forever, with only 16,261 recovered in 2018. Here’s a breakdown of stolen motorcycles by type:

So think about that for a minute. Almost 5,000 Harley® owners woke up one morning, went out to go for a ride and found an empty parking space. And some fool got a free Harley® out of being dishonest.

There’s more bad news for motorcycle owners. Texas is one of the top states for motorcycle theft for a number of reasons. First, we have more bike owners per capita, so there are more motorcycles to steal. Second, we have good riding weather for much of the year. Some states have had snow on the roads for more than a month already this year. We’re entering some of the best days for riding you’ll see in 2019.

When you drill down further, motorcycle theft is most likely to happen in big cities with high population concentrations. Of the top 15 cities for bike theft, Houston and Austin ranked high on the list. Houston had 460 bikes reported stolen in 2018 while Austin residents reported 329. Interestingly, while the number of overall stolen motorcycles in the United States decreased, the number of bikes stolen in those Texas cities went up.

How to Keep Your Harley From Being Stolen – 10 Tips

RideApart interviewed a cop and a motorcycle thief and wrote an article on what they said. The thief said a gated parking garage in a good part of town is the number one place bike thieves go shopping. That’s because it’s a likely place to find well cared for expensive motorcycles and owners who think their bikes are safe. They’re not.

The best way to keep your bike from getting stolen is to refuse to be complacent. Stay vigilant. Realize it’s when you get lulled into a sense of security that you stop taking precautions. Anti-theft devices continue to evolve, but thieves do too. They’re mostly on the lookout for low hanging fruit. You can keep your bike safe with these tips.

What Harley Models are Compatible With H-D Connect?

The first year of H-D Connect is free when you buy the following 2020 equipped Harley models:

AtnBlack Gold Harley-Davidson in Allen, we sell a range of security systems and anti-theft devices for your Harley. Stop by and talk with one of our associates and we’ll help you choose the security system or security device that works best with your bike and increase your chances of never having bike theft happen to you. Get in touch to find out more.