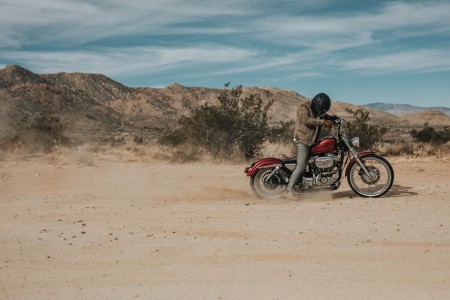 There's a learning curve for everyone, and mistakes happen. Some just look silly, others could get you killed. Check out this list to see if you've made any of these common beginner mistakes.

Riding With Your Knees Pointed Out

New riders sometimes go to one extreme or the other. Either they’re completely stiff, arms locked and hands in a death grip on the handlebars, or they don’t seem to know what to do with their legs, and their knees end up sticking out at an awkward bend.

When you ride, the balls of your feet should be on the footpegs, toes pointed forward, and knees should be in tight toward your bike. Allow your upper body to stay loose and relaxed, but legs stay in. Allow movement in your hips so you can guide your bike with your knees, legs, and feet.

Expecting Other Riders to See Them

When you’re on a motorcycle, typically you’re hyper-aware of other traffic. You have to be, since you’re vulnerable and riding a powerful piece of heavy machinery on hard surfaces. Plus, there aren’t barriers between you and the road noise, so you hear the roar of your engine and the sound of vehicles around you. Newbies sometimes assume all the other drivers have the same awareness of their surroundings.

If you’ve been riding a while, you know just how untrue this is because drivers have proved again and again they don’t have a clue what’s happening around them. Assume other drivers not only don’t see you, but they’re probably about to do something unexpected without signaling. Be constantly on the lookout for an escape route so you’re ready when they do.

If you’re learning to ride, always wear a helmet, motorcycle riding boots, and abrasion-resistant clothing. All seasoned riders shake their head at the guy riding in shorts and flip flops.

You shouldn’t drive anything after you drink, and especially not a motorcycle. If you’re dumb enough to drink and get in a car, you at least have four wheels and a metal shell around you. On a motorcycle, you have to balance, stay aware of your surroundings, and you’re exposed to every road hazard out there.

Plus, when you drink, your inhibitions are lower and you make stupid mistakes. You think things like, “I don’t need my helmet,” and “There’s plenty of room to pass that car before I smash into that 18-wheeler.” You drive more aggressively and impulsively.

Choosing a Bike Just for Looks

You absolutely should love the look of your bike. But fit matters too. New riders pick a bike that fits their idea of what they should look like as a rider, but if it doesn’t fit their body type and riding style, they’ll struggle with it at slow speeds, and they’ll be uncomfortable on long trips.

The best way to avoid this is to talk to someone who can help you evaluate fit when you buy your bike. If you’re interested in a particular bike and it isn’t a great fit, they can suggest modifications so you can make it more suited to your frame.

Sometimes it’s not the best idea to start by buying the biggest, baddest Harley® out there or the fastest, most powerful motorcycle they can afford. It’s kind of like when you first learn to drive a car. You’re going to make some mistakes. You wouldn’t start with a brand new high-end sports car. For many new riders, it’s not a bad idea to start with a mid-range bike and work your way up.

Trying Everything Their Friends Do

Some people get into riding because they see their friends do it, and they want to join the fun. Then they confuse their motorcycle license with experience and try things they see more seasoned riders do. Sometimes they’re riding with a group and they find themselves in a situation they don’t know if they can handle, and they’re too embarrassed to admit it. Other times experienced riders make something look easy, and the newbie assumes that must mean anyone can do it.

In the months after you take your basic motorcycle safety course and get your motorcycle license, limit yourself to practicing basic riding skills and learning slow-speed maneuvers. No tricks, no stunt riding, no flat track racing, no trying crazy new stuff just to look cool.

The same idea applies to long rides. Newbies tend to underestimate the toll hours on the bike take on the body. Try to work your way up by taking rides that get gradually longer instead.

Not Visiting Your Allen Harley® Dealership

Okay, that doesn't actually make you look like a beginning rider, but if you haven't been by lately, you're missing out. We have the biggest collection of new and pre-owned Harley-Davidson® motorcycles in the area, a nonstop lineup of events, all the motorcycle riding gear you need, and the H-D® merchandise you've been looking for. Come see us this week or browse our inventory online.