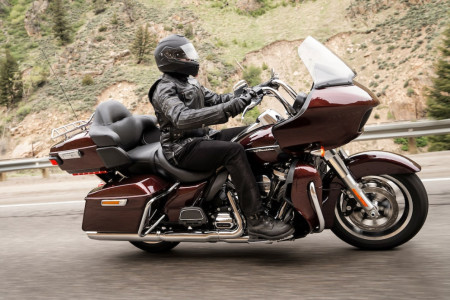 If the zombie apocalypse started and you had to pick just one motorcycle, which one would give you the best chance of survival? Or, if you stepped into a Dallas motorcycle dealership and had to choose between Harley® Road Glide Ultra and Indian Roadmaster, could you make the best choice?

They're both luxury touring motorcycles in the same price range, but which one is better? What if you weren't already familiar with the Harley® lifestyle and convinced of Harley® quality? If it was your first time seeing and test riding Harley® Road Glide Ultra and Indian Roadmaster, which one would you be most likely to buy? Let's take a look at them side by side, comparing Harley® Road Glide vs. Indian Roadmaster of the same year.

They're both touring bikes, designed to spend hours and days on the road in comfort. They both have American-made V-twins, a design that provides ample wind protection and much more luggage capacity than smaller motorcycles by both manufacturers. They both have a front-mounted fairing. Plus, they've both always been good looking bikes. But Harley® has always been a step ahead, a cut above.

If you're going to be on the road a while, it's not just about listening to music. Your infotainment system becomes both a convenience and safety feature.

Roadmaster fans point out Indian's Chieftain and Roadmaster touring models both received an upgrade to the Ride Command infotainment system. The menu does have a lot of options. It's a little like Indian packed every feature every rider could possibly want into several menus. There are choices everywhere, which can make it hard to find the ones you want.

With Road Glide Ultra's latest BOOM Box upgrade, startup time is cut in half compared to the previous BOOM Box system. It's a full touch-screen system that works when wet or dry, whether you're wearing gloves or bare handed.

It's easy to use, starting with three simple, large icons that lead to intuitive menus. Swipe, zoom, drop a pin and search as easily as you would from your phone.

Indian's seat has stylish stitching, but it's thinner than Road Glide Ultra's. You'll have less padding, which starts to hurt as the miles stretch on.

Roadmaster and Road Glide Ultra both have a deep rumble in the exhaust, but some say Indian can be too loud. We think the sound of a Road Glide Ultra's exhaust is on the same frequency as the soul.

The weight of Roadmaster's handlebar-mounted fairing can make it difficult to steer at speed on curves, especially when there's a heavy crosswind.

Riders also complain about engine heat from Roadmaster. That's definitely something to take into account when you ride in Dallas, Texas.

Other Numbers You'll Want to Know

When you look at 2019 models, here are some of the numbers.

So here's the thing. If the zombie apocalypse happens and you have to jump on a motorcycle fast, you're going to want one built for the long haul with plenty of capacity for your survival gear. You also want the one that can go the farthest on a tank of gas and has the most comfortable ride. What you don't want is to wear out your arms fighting the wind. You'll need all your strength to behead zombies.

Plus, it would suck to die on a hairpin curve because you can't get your Indian Roadmaster to make a sharp turn. Stick with the Harley® Road Glide Ultra. You won't just survive, you'll look badass doing it.