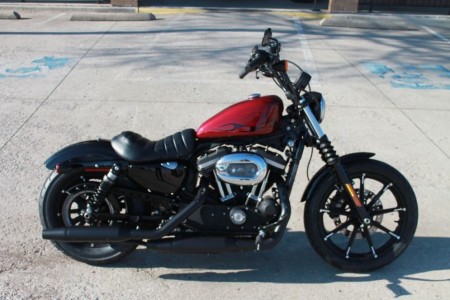 WHEN YOU'RE BROWSING IRON 883 FOR SALE NEAR DALLAS...

You wouldn't be the first one to fall in love at first sight. There's something about a Harley-Davidson® Sportster Iron 883 that gets inside your head. It connects with that powerful desire to own, wraps around your adrenal gland and whispers even in your dreams.

Iron 883 has that classic Harley® look, feel and sound. You can tweak pretty much every aspect of it to turn it into a custom motorcycle like no one in Dallas has ever seen.

Iron 883 has a rich history, so when you buy a Sportster near Dallas, you feel like you own a machine with a proud heritage. Over the years, Harley® has made updates that improved looks, power and performance while still staying true to Iron's roots in racing and off-road riding. Whether you're looking to buy an Iron 883 near Dallas or reading about the bike you already own and love, read on for your Sportster fix.

This is one history lesson that won't put you to sleep. Right about the time Elvis Presley sang he was "All Shook Up," Harley® introduced the first Sportster. It quickly became one of the most popular motorcycles in the world.

Harley replaced K models with the XLH, XLC and XLCH models. The XLCH was for off-road riding and XLH was designed for racing, and both had 883cc air-cooled engines.

From 1957 to 1985 the Sportster had a 54 cubic-inch, overhead-valve motor known as the Ironhead because of its iron cylinder heads. After that, Harley replaced the Ironhead with the Evolution or Evo engine. As Harley® headed into the 2000s, Sportster got frame modifications that lessened vibration and gave it a streamlined look. In 2009 Harley® released the first official Iron 883 models.

Harley® assembles every single one of these bikes with deep pride. It shows in the power and performance, but in the little things too.

Finishes are deep and well applied. Harley® uses metal where the competition uses plastic for a beefy feel. You get metal switch housings, metal fenders, metal headlights and sidecovers.

From the beginning Irons were known for their defiant attitude that embodies the essence of motorcycle riding. The dark custom appealed to rebels, pioneers and anyone else who lives life against the grain. It's gritty and old school, which is why we love it.

HOW TO CUSTOMIZE IRON 883

If you buy an Iron 883 in Dallas, you're most likely going to want to turn it into a custom motorcycle. There's just something about this bike that creates an instant connection between motorcycle and rider. You will fall in love.

Harley-Davidson® makes it easy to turn your Iron into a custom motorcycle with a huge list of accessories. Right now just for the 2019 Sportster Iron 883 they have 19 pages and 829 products, so there are a ton of choices for making it your own.

For functionality, add a passenger pillion so your S.O. can ride in comfort. Add a luggage rack in one of Harley's® many different finishes. Saddlebags or a tail bag allow you to carry more than you can fit in a backpack.

For custom looks, add a custom tail section for an incredibly unique silhouette. It's available in Vivid Black, or you can get it unpainted and match it to your ride. If your Iron 883 isn't quite dark enough, add a Dark Custom derby cover, air cleaner trim and timer cover. Or add chrome pretty much everywhere with Harley's® many options for Sportster.

How far can you go on a tank of gas?

It doesn't have a gas gauge, but the fuel light tends to come on when you've ridden between 75 and 100 miles. If you reset when you fill up, you'll always have a good idea when it's time to pull in to a station.

That depends entirely on you. There's no one good starter bike for everyone. It's important to find the motorcycle that's the right fit for your riding style and body type. The only way to tell whether or not Iron 883 is the right motorcycle for a beginner is to go to a dealership. We have friendly, knowledgeable staff members who can help you make your decision and if Iron 883 isn't the one for you, we'll help you figure out one that is.

Sportster Iron 883 will easily go above 100 mph. If you do have a chance to test it on a closed course, you're probably going to be too busy watching the road to check your speedometer.

What about Sportster Iron 883 maintenance?

That's one of the many great things about this bike. Change the oil, change the primary fluid and that's about it. Spark plugs are right near each other, swap them out once a season. The belt is nearly maintenance-free. Change the oil on schedule and stay on top of the battery, and your Sporty will last forever.

WHERE TO BUY IRON 883 SPORTSTER NEAR DALLAS

At Black Gold Harley-Davidson® in Allen, Texas we carry brand new 2019 Iron 883 motorcycles. We also have new 2018 Irons still available. If you're looking for a pre-owned motorcycle, browse our used Iron 883 motorcycles for sale near Dallas when you click on this link. At the time this article is being written, here are a few of the bikes available:

They're extremely popular and they go quickly so if you see something you like, don't wait. Get in touch online to find out more or give us a call at 214.495.0259.