People new to the Harley® family sometimes look at product lines like Softail or Sportster and wonder if there's much difference between models. Side by side, at first Street Bob and Fat Bob don't look all that different.

Their names are similar and they're both on a Softail frame, but that's where the similarity ends. Fat Bob is an aggressive, performance-oriented bike, where Street Bob has the classic bobber look with updated lights and displays.

If you're doing your research it's probably not just academic. You're likely making comparisons because you want to buy a Harley in the Dallas area. At Black Gold Harley-Davidson® in Allen Texas, we want to help you find the bike that's right for you. We're offering this comparison, but we also want to encourage you to come talk to one of our brand ambassadors.

Choosing a Harley® is a highly individual process. Sometimes our customers have to try out a lot of different bikes before they find the right fit. Once you're done with your online research, we're here to walk you through the next step of the process.

The security system option comes standard for both. ABS is standard in the Fat Bob 114.

Fat Bob is a little longer at 92.1 inches in length vs. Street Bob's 91.3 inches. It's taller as well with an unladen seat height of 28 inches compared to Street Bob's 26.8. Ground clearance is very similar with Fat Bob at 4.7 inches and Street Bob at 4.9. They also hold around the same amount of gas. When you fill up your Fat Bob, you'll have 3.6 gallons. Street Bob holds a still-generous 3.5 gallons.

Street Bob is 20 pounds lighter. Fat Bob in running order is a hefty 673 pounds, while the leaner Street Bob weighs 653. Which ever bike you choose you'll get an estimated city/highway fuel economy of 47 miles per gallon.

Fat Bob has the greater lean angle with 31 degrees on the right and 32 on the left. Street Bob gets 28.5 on either side.

The difference in the wheels is probably one of the first things you noticed. Front and back wheels on Fat Bob are denim black, structure cast aluminum that includes laser-etched graphics. On Street Bob, both wheels are gloss black and steel laced.

As you probably know, you can read specs and watch videos all day long without understanding what the bike actually feels like. Here's what riders say about test riding Street Bob and Fat Bob motorcycles.

Street Bob has a sporty suspension, recently redesigned forks and quick acceleration. People who haven't ridden a Harley® in a while rave about Street Bob's smooth ride with very little vibration. 2019 Street Bob has a sleek, 2.14 inch LCD speedometer that also includes gear, odometer, fuel level, clock, trip, range and tachnometer. It's all easy to read at a glance, which helps on busy Dallas streets.

Street Bob has very light shifting and a smooth transmission. The mono-shock in the back minimizes bumps in the road. Riders say this bike consistently feels like it wants to take off with an insane amount of pep.

Street Bob has a more traditional look, where Fat Bob is a little edgier in its design. Street Bob has the stripped-back look of a custom classic with tall bars and mid-position foot pegs. People taking their first test ride can't get over the insanely high fun factor. It's only an inch shorter, but that inch can make all the difference for riders with a shorter inseam.

As far as looks go, Harley designed Fat Bob to look like it could survive the zombie apocalypse. It's menacing, with a tank-like visual impression and a serious amount of presence. Throw a leg over and you'll find all metal, no plastic everywhere it counts.

It takes off like a rocket with a motor that's even more powerful than Street Bob's. Despite the fatter back tire it still has plenty of lean angle. On the dial there's a speedometer, gear indicator and analog RPM indicator. Some people say it has a stiffer feel to the suspension, but there's adjustable knob on right hand side that also helps if you're a shorter rider. Fat Bob has a slightly sportier feel, where Street Bob leans toward classic motorcycle.

Even with the chunky tires, Fat Bob's narrow front end allows sharp cornering. The bike has a balance that makes you want to lean into every turn. It has amazingly smooth transmission shifts.

The comfortable foot position with far forward foot pegs feels comfortable for taller riders. Its Brembo brakes rock. Fat Bob's horizontal LED headlight gives ample illumination for night riding. Some say the seat is a little stiff, but you can always swap that out.

At the time this article is being written, we only have one used Fat Bob for sale at our Allen, Texas motorcycle dealership. Click the photo to see this 2018 Softail Fat Bob FXFB. 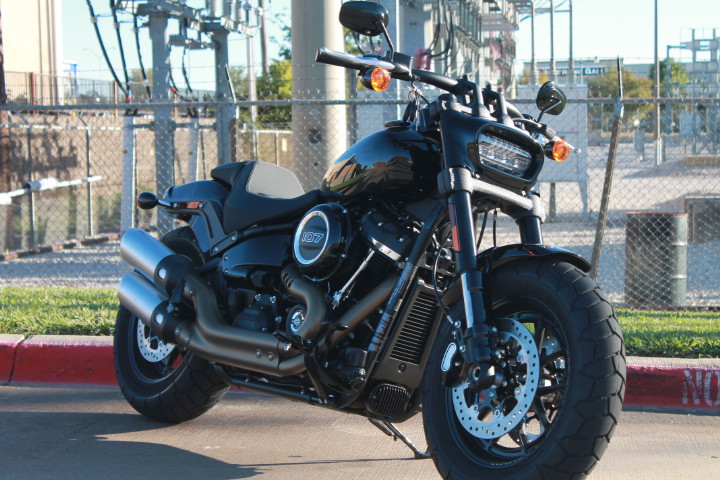 We also just have one Street Bob for sale near Dallas. There's a video available through the link. Click the photo for more information. 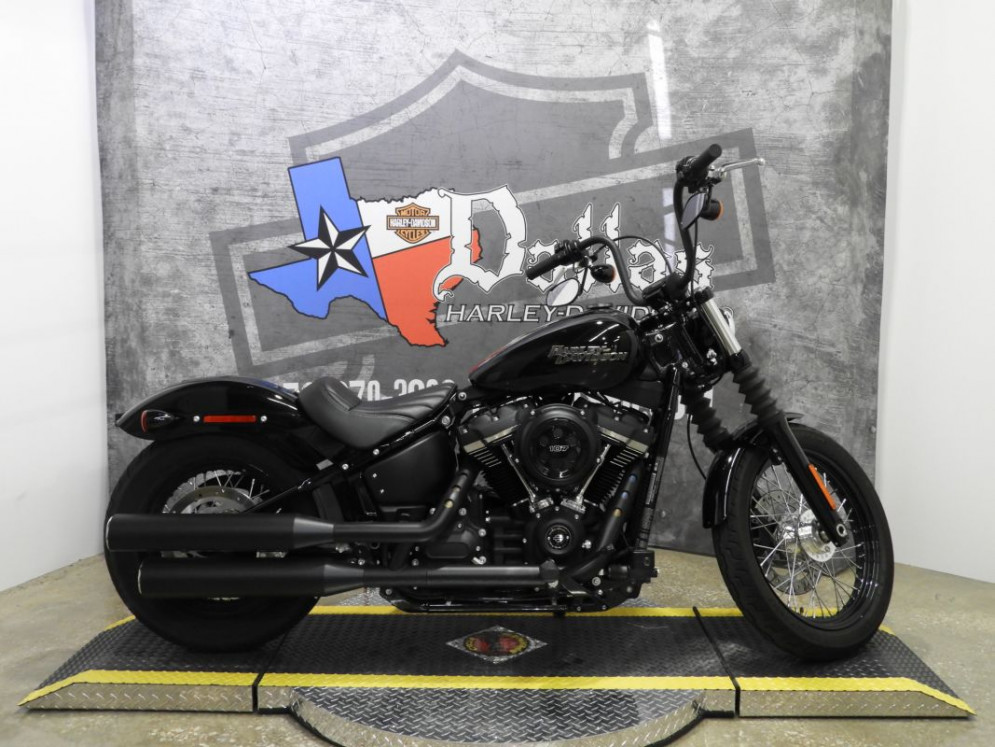