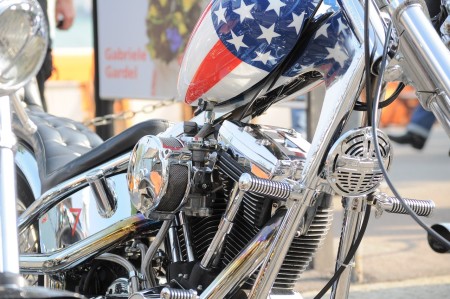 With Fourth of July right around the corner, Americans are taking stock of the state of our nation. It's a time of reviewing where we are, how we got here, and where we want to be in the future. In a time of uncertainty and change, Harley® riders are a rock solid symbol of what makes America great.

WE VALUE FREEDOM ABOVE ALL ELSE

At the heart of the Harley® lifestyle is a deep appreciation for the freedom we have as Americans. That means something so much more profound than just the right to do whatever we feel like. That would lead to anarchy.

Bikers have a reputation for being loud, tough rebels that roar into bars and run over anyone who gets in their way. In reality, that’s the opposite of how most Harley riders live. Sure, we know how to have fun with other bikers and if you don’t love the Harley® sound, you’ll never get it. But under all that is the idea freedom is preserved when our choices allow others to think, believe, speak, worship and gather as they choose.

If your political beliefs don’t agree with our own, hell yeah we’ll argue with you. We deserve our reputation as loud and opinionated. But if you back your beliefs up with brains and live what you’re saying, we’ll also respect your right to disagree with us.

At the same time, we have little tolerance for people who harass and disrespect others. Expect us to step in when someone’s freedom of expression is being trampled.

Our bikes are a symbol of our respect for individuality and self-expression. Walk in any local Harley® shop and you’ll see bikes for every age group, gender and income level.

Some bikes are for men and women in their golden years who want to tour the nation in comfort. Others are sport bikes for those who prize speed and agility. One thing almost all Harley® riders have in common is that when they buy a bike, they make it their own. It becomes more than a machine, it’s a symbol of who they are.

WE VALUE THE CONTRIBUTIONS OF OLDER GENERATIONS

When we look back in history, we realize we have big shoes to fill. The men and women who came before made this nation what it is, now we’re responsible for safeguarding it for future generations.

Our nation isn’t perfect. There are scars that run deep. Politicians and everyday citizens have done things they shouldn’t and hurt countless others in the process.

But at the same time, there are also men and women who did more. They showed integrity and courage far beyond what was expected of them. They discovered cures for diseases, invented revolutionary technology and sent humans into outer space. We look up to them, and we feel a deep sense of reverence and gratitude.

We feel the same way about old Harley® bikes. Since 1903, there’s been an evolution that required courage, hard work and innovation. Riding allows us to be part of that history. Harley riders now are the bridge between the past and the future.

WE BELIEVE IN CAPITALISM

We believe we have a right to buy, sell, work and hire how we want. If that means spending $40,000 or $400 on a motorcycle, that’s our business. If Harley® makes a lot of money because it manufactures and sells an amazing product all over the world, we think that’s great.

We’ll also point out capitalism results in the best products for the best prices. Consumers pay the most for what they want the most. We choose to spend some of our income on Harley®, you do what you want with yours.

WE THINK OUR COUNTRY IS BEAUTIFUL

Across the board, Harley® riders embody the American spirit because we feel an elemental connection with our nation’s beauty. Scroll through any dealership’s Facebook page or visit any Harley forum. It won’t take long for you to come across riders on a mountain top, at the edge of a lake, racing along the beach or pausing to savor a sunset.

On almost every Harley rider’s bucket list is the chance to ride from sea to shining sea, with time to stop and enjoy along the way.

The Harley lifestyle is based on an attitude, not a skin color, gender or religious affiliation. Anywhere we gather you’ll find men and women of every ethnicity. What brings us together is our love for riding, and that’s pretty much all we see. In general, we’re only going to judge you if you don’t take care of your bike or you ride with a lack of courtesy toward others.

We’re grateful every day for the safety and security we enjoy because of the sacrifices of men and women who have worn a uniform. We know the freedom we have to ride and to live as we choose isn’t actually free. We’re humbled when we get to interact with someone who answered the call to duty and sacrifice.

WE LOVE 4TH OF JULY CELEBRATIONS

This Saturday, July 6 join Black Gold Harley-Davidson® of Dallas for our 4th of July Celebration. From 11-3 we'll have a bikini bike wash, popsicles, hot dogs on the grill, watermelon and a used bike blowout. Get in touch to find out more.