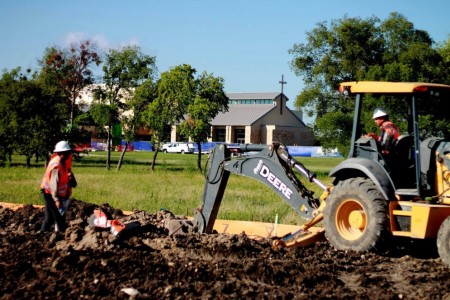 Harley-Davidson® of Dallas is building a new facility to offer additional motorcycles, merchandise, events and service. The new location will still be in Allen, but the dealership will operate under a new name, Black Gold Harley-Davidson.

Allen, TX (PRWeb) August 23, 2018 – Harley-Davidson® of Dallas has been operating at its current location at 304 Central Expressway in Allen for the past several years, but that will soon change. The dealership recently began constructing a new facility at the intersection of TX-121 and Stacy Road.

Harley-Davidson® of Dallas chose to begin construction to expand its current offerings and be more accessible to motorcycle enthusiasts in Plano, McKinney, Lucas, Frisco and other communities in the DFW area. These communities continue to experience population growth, and demand for new and used Harley-Davidson® motorcycles, bike products and motorcycle service has grown as well.

What else is changing?

When the dealership moves to the new location, it will also operate under a new name. That new name will be revealed soon.

Co-owner Paul Langford chose the new name because he feels the introduction of Harley-Davidson® motorcycles and the discovery of Texas oil both had a historical significance that continues to impact Dallas communities. The new name will link both parts of Texas history.

During the early 20th century, the oil strike at Spindletop near Beaumont drew national attention when The Lucas Gusher shot oil 150 feet into the air for days before it was capped.

Around the same time, William S. Harley and brothers Arthur and Walter Davidson invented motorcycles that brought Americans additional transportation options. The three created custom motorcycles for the U.S. armed forces. Post-war production included the Sportster and other signature models that became widely recognized in Texas, the United States and the world.

Oil discovery and Harley-Davidson® will impact Texas far into the future. Harley-Davidson® continues to add performance-oriented models and technologically advanced features to improve the riding quality of its bikes.

Harley-Davidson® of Dallas/Black Gold Harley-Davidson sells and services new and used motorcycles in the Allen and DFW area. They received the 2017 Bronze Bar and Shield Award from Harley-Davidson® Motor Company because of their high product sales performance, customer service rating and operational measures. Dealership staff say customer satisfaction is top priority, and they look forward to doing so even better at their larger, newer facility.