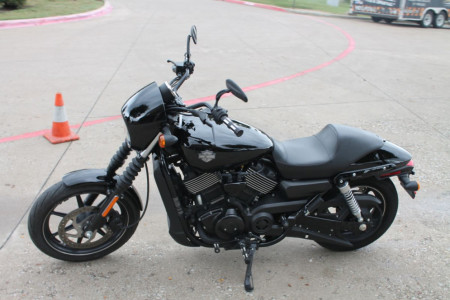 For over 100 years, Harley-Davidson® bikes have had a deep history when it comes to motorcycle racing. Some Dallas riders buy it because they're looking for an entry-level Harley-Davidson®, and this one is a solid bike that fits almost any budget. Others want a minimalist bike with raw Harley® power built for speed and agility. But which Street® model is right for you? Let's look at pricing and performance for Street® 500, Street® 750 and Street Rod™.

Add the ABS option to any of the three for $750 and the Security System option for an additional $395. Freight costs vary depending on which model you choose.

All three have a black two-into-one exhaust.

At 87.2 inches, Street® 500 and Street® 750 are longer than Street Rod, which measures 83.9 inches in length. There's less than two inches difference in the unladen seat height, but a significant 4.1 inches with a 180 pound operator on the seat. Street Rod™ is taller and comes with 8.1 inches of ground clearance while the other two bikes have 5.7.

They're all light, with the first two weighing 514 pounds in running order and the Street Rod™ still a lean 525 pounds. All three carry 3.5 gallons of fuel when the tank is full. Street® 500 gets the best fuel economy with an estimated 64 highway miles per gallon. Street® 750 gets 55 mpg and Street Rod isn't far behind at 54 mpg.

Cycle World's Blake Connor rode a Street 750 soon after Harley® started production. His review says he took the bike through Austin's urban streets and down Texas Hill Country back roads. He says he liked the following:

Lemmy reviewed the revised 2017 model and compliments H-D's® attention to detail with things like the heel guard on the muffler, improved brakes and streamlined presentation.

What do Dallas riders say when they buy a Street® motorcycle from our Allen Texas dealership? Real people always rave about the minimal cafe racer styling. They say the incredibly smooth engine lets them blast between Dallas traffic lights or around downtown corners with plenty of power to spare. Over and over we hear about impressive handling and agility.

If you're not sure you want to buy a 2019 Street®, we still have some new 2018 H-D® Street bikes for you to test ride. At the date of this writing, we also have these used Street motorcycles for sale.

Whatever you're looking for, if we don't have it we can find it for you. Set up your free test ride on any Harley-Davidson® Street® in store when you click this link.